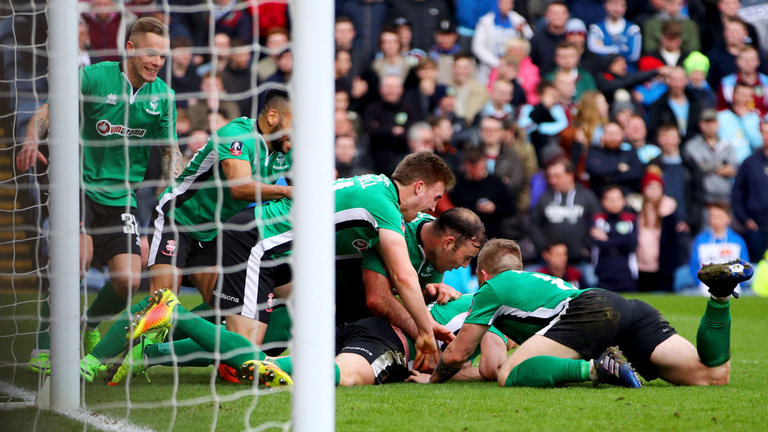 As a football player, you would always of course love playing in a World Cup final or the Champions League final but going on an FA Cup run would always be different…especially with a smaller team.

In the case of recent FA Cup shocks…around two seasons ago, League One Bradford completed one of the biggest FA Cup stories over the past decade with a stunning 4-2 victory over (then) leaders Chelsea at Stamford Bridge. In 2010, (then) League One Leeds United knocked out their fierce rivals Manchester United out in third round with a narrow 1-0 win at Old Trafford. Luton Town (then non-league) produced a huge scalp when they upset a (then) Premier League Norwich City at Carrow Road in 2013.

It was a ‘Super Saturday’ in the FA Cup Fifth Round, as the cup continued its healthy prospectus of stunning upsets when Premier League Burnley welcomed National League leaders Lincoln to Turf Moor. Burnley had previously managed to beat Liverpool and Everton here at Turf Moor but SOMEHOW failed to book their place in quarter-finals as Lincoln’s Matt Rhead popped up with a last-minute winner to write his team’s name into the history books. Whilst doing so Lincoln finally ended the 103-year wait for a non-league side to reach the FA Cup quarters.

Meanwhile, Millwall produced their third consecutive Premier League scalp as a last-gasp winner from Shaun Cummings helped the London side overcome a struggling Leicester City and subsequently booked themselves a tie at White Hart Lane in the quarters.

Championship high-flyers Huddersfield Town held Manchester City to a frustrating goalless draw to force a lucrative replay at the Etihad Stadium on the 1st of March.

But the whole country was waiting for Sutton United to complete the deal when they hosted Arsenal in a buzzing Monday night kick off. Arsene Wenger opted for a reasonably strong side, which saw the likes of Theo Walcott, Alex Iwobi and Shkodran Mustafi come up against the part-timers. Arsenal were constantly frustrated by the Sutton defence but the breakthrough finally came when Lucas Perez’s low cross ended up in the back of the net. Theo Walcott scored the 100th goal of his Arsenal career as his fierce strike booked the Gunners’ place in the quarter-finals and a home tie against Burnley’s conquerors Lincoln City…

2 thoughts on “The FA Cup: Where dreams come true…”